EPKK
Avaleht News Baltic Farmers: Will the next generation of farmers need to wait for... 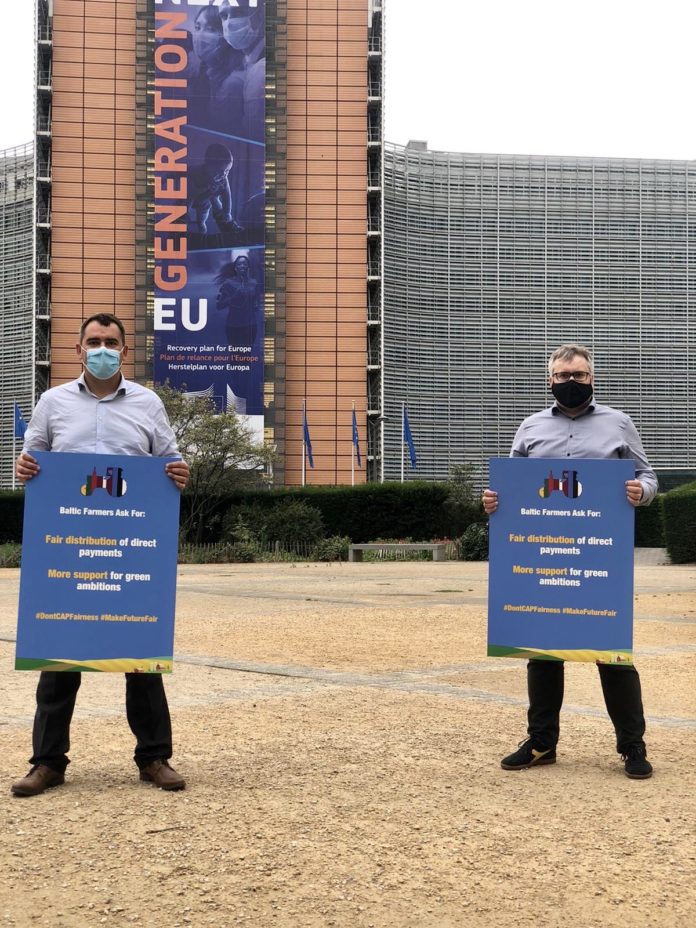 Brussels, Jul 16 2020 – Ahead of the negotiations for the EU’s next budget a coalition of farmers from Estonia, Latvia and Lithuania has urged Europe’s leadership to not waste the chance to use the next Multiannual Financial Framework to address inequalities among farmers across the EU. Respecting public health advice and social distancing rules, farmers also held a symbolic protest ahead at the Schuman roundabout, carrying the message of hundreds across the three countries for fairness in the EU internal market.

Direct payments under the Common Agricultural Policy serve as a safety net for farmers in times of a crisis. Nevertheless, Baltic Farmers remain uniquely exposed as they receive the lowest direct payments in the EU, 54-60% of EU average, while their production costs are much higher than the EU average, amounting to respectively 129% (Estonia), 112% (Lithuania) and 113% (Latvia). The income of farmers in the Baltic States thus depends much more on the market situation than in other countries.

The issue of the unfair distribution of direct payments dates to the EU accession phase of the Baltic states is a long standing anomaly, with the initial payment calculations based on a period during which the countries were undergoing major land reform transitioning from the Soviet centralized model to family farming structures. The result of an unprecedented drop of productivity during those years, which obviously did not show actual production capacity, was taken as reference. This has led to a historical but ongoing injustice.

Farmers have been protesting this injustice for years. Seven years ago, in February 2013, the European Council unanimously agreed that, “by 2020 at the latest, all Member States should reach the level of at least EUR 196 per hectare at current prices”. Since then, Baltic farmers have continued to systematically receive no more than 54-60% of the European average in direct payments, despite repeated calls for an end to this unfair distribution of funding which does not reflect the realities of agriculture on the ground in the Baltic countries, and does not help them finance practices beneficial for climate and the environment.

According to the current proposals, another generation of Baltic farmers would need to live with this injustice, as the three countries would receive in direct payments only at 77% of the EU average by 2027. At the same time, the fact that agricultural income in the three countries is expected to decrease and expenditure to increase, jeopardizes the future of the sector as a whole.

As the EU’s leadership is currently working towards a new budget to support Europe’s recovery, this is a once in a generation chance to fix this injustice and ensure that no-one is left behind. On agriculture, farmers call for maintaining allocations for both pillars of CAP, enabling further market measures, and accelerating the convergence of direct payments towards a fairer system of distribution. The representatives of the farmers called for a fair CAP in the next MFF, saying that: “Our generation had to face and fight this injustice for years. We hope that the next generation of farmers will not face the next generation of unfairness. We ask Europe to treat all links as equal in its future budget and stop treating Baltic farmers as second class citizens ”.